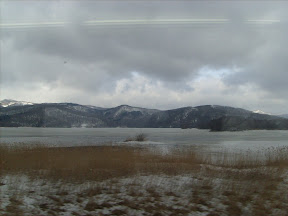 It was 6:20 am, and though my eyes were blurry and my legs not pointing in exactly the intended direction, I headed towards the lift to the ground floor of my hotel. I asked the receptionist to call the hotel I was heading towards to tell them I would probably be late; the journey today was not a lot different to yesterdays, when I had been in the busy but mild climate of downtown Tokyo. The milage was going to be a little less, but the trains were slower up here and my intended journey twisted its way through a dozen cities on trains that weren't in peak fitness. My Japanese was not brilliant so after asking them in my best phrasebook-parrotted Japanese, the hotel staff on duty helpfully rang the number for me (the bit I could do) and then promptly handed over the receiver for me to tell them (the bit I was hoping they would do). I garbled what I could down the phone (a slightly re-translated version of the one I had done for this hotel the previous day) and hoped for the best.

I'd had an idea about the packs on my back which by now had lost their naive backpacker charm and were cutting into my shoulders. Since I knew that I would be returning to this hotel in a couple of days time, I asked the people there to stow away the larger of my rucksacks, and after some quick re-packing, he placed it in full view of everyone on a shelf next to the lifts and gave me a little token. Thanking him with a hint of unease, I left my things and headed to the station.

At 7am, Hakodate was almost completely deserted, quite a shock after the bustle I had seen so far, and the chill wind and threat of rain or snow at any moment resurfaced that soviet feel I had gotten the night before. Bathed in cold morning light, a couple of cars and a single tram rattled by before I made it back to the station, a thunderbirds-inspired beacon of civilisation in an otherwise ghost town.

Passing through the station, they had laid on a display telling people of the imminent Sakura blossoms (though I think they were a bit premature in the same way shops in the UK treat Christmas) and passed a massive mural that I swear wasn't there the day before. At 7.30 on the dot, the train left the station and I was on my way to Sapporo. 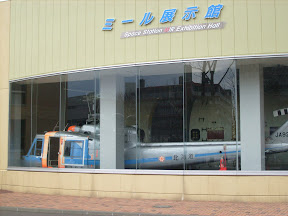 Clattering along, I checked my little travel book. Tomakomai was a few stops away and it had a science museum. Located a good 10 minute walk away from the station, the Space Station Mir exhibition hall had just that; a complete replica of the Mir spacecraft that you could climb into and look around, complete with what the book referred to as a scary contraption for going to the toilet. I was allowed one stop on my way today so with a description like that I decided it would be this one.

With no map in the book to guide me, just some directions which by now I had learned to take with a pinch of salt, this place seemed an awful way away. The streets weren't particularly busy, and it seemed I was the only westerner for a long way, and a long time, given the strange looks I was receiving from passers by. One man even aborted crossing the road to my side the moment he saw me, which I made him aware that I'd seen by giving him a good glaring at.

Eventually a promising building hoved into view on some back streets that were about as far away from the station as I was prepared to go. Rounding the building, a promising but unkept car park appeared, and a perfectly preserved Japanese steam engine was sat outside, just as the book said. Then the solitude hit me.

The place was closed, and it seemed, completely deserted. I checked my book - open 9-5 Tue-Sun. I checked my watch - Monday. Bugger.

It seems that, much like Sundays were in the UK about 15 years ago, Mondays in Japan are days of rest where people don't do much at all. Checking other attractions in the book it became clear. 4 out of 5 places were closed Mondays.

Slightly peturbed, and resigned to the fact that anything else beyond the local Lawsons or the hospital would be shut tight, I strolled aimlessly around the train and the building, looking in at the Mir model just temptingly out of reach, whilst trying not to look too much like a burglar for any security cameras that might have been spying me. Once I got bored of that, I decided it was time to head back to the station, stopping only briefly for a semi-tame crow and a Nissan Micra that someone had decided it would be a good idea to weld the front grille from Morses' Jaguar onto. 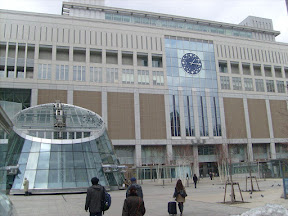 Back at the station, I jumped aboard another green Super Hakuto LEX train which sped me to Hokkaido's 'capital', Sapporo through another section of freezing countryside. Famous mostly for its beer, I spent a short time in Sapporo as the connecting train didn't take long to arrive. (literally, take a couple of pictures outside, head to an internet cafe and upload pics/email, then speed back to the station - I'd be back in Sapporo to see the sights tomorrow anyway so I wasn't too bothered)

Asahikawa was the next spot on the map, and since I was running low on Yen, it sounded like a good time to cash some of my travellers cheques. Unfortunately as I disembarked for the final leg it had just turned 5, and after some time talking with some very patient tourist information ladies at the very end of their shift, they pointed me down a very long and straight street, 10 or so minutes away was the Asahikawa Grand Hotel who apparently were able to cash the cheques for me. One of the ladies even rang ahead for me and put a cross on a map thrust into my hands. I had about a half hour.

Slipping and sliding away down the slightly icy streets as the last hour of daylight got underway, my stomach gave a gurgle. Not the type of gurgle that says 'i'm hungry', the other type. I got a move on and reached the hotel, which was very warm, very mahogany, and very velvet. Slightly sweaty and wearing clothing one day more than was really recommended, I felt more than a little out of place. However the receptionist was very accommodating and the footmen didn't seem too hasty to drag my scruffy carcass away. I bowed and left with a fistful of crisp notes.

On the way back down the very long street to the station, my stomach gave a louder, more panicked gurgle, making my walk back a little more hurried and a little more akin to a panicked penguin. What happened next I will spare you from the details, but anyone going to Japan needs to quickly learn where the western-style toilets are, and where the squat ones are. I did, very quickly. While most hotels, restaurants and trains have western ones or a mix, most railway stations only have Squat toilets. They take a certain level of ..balance.. that you don't usually acquire unless you come from a place where you're on your knees on a tatami mat for most of the day. And there's often no paper.

We must never speak of the Asahikawa incident again, other than for me to say if you were the attendant who had to unblock a screwed-up map of Hakodate from the the Asahikawa station lavs that evening, I'm sorry.

After spending some time in the most welcome western toilet I've ever been on, I found my seat on the train, which by now had moved several miles towards my final destination for the day. After another session of seat-turning at the lonely Engaru station, Abashiri station rose out of the darkness. It was 8pm again, and the snow and ice that had until now stayed mostly in the wilderness, had ventured fully into this city, which was full of 4ft snow-drifts and a pavement like an ice rink. Stopping off at a Lawsons on the way, I grabbed a microwave cheesy thing and some drinks, then I made my way down one of the main streets, recognisable because of the buildings rising out of the ice rather than being able to see the road or pavement, the map and real life came together in brief dimly-lit harmony and I managed to find my room for the evening.

I had travelled a thousand miles or so through Hokkaido and had very little daylight time to show for it that wasn't on a train. This was not going as well as my naive plans had suggested.
Posted by fancyplants Posted on 5/19/2008 06:51:00 pm