Day one begins with a shower, which is pretty typical for the walk between Leeds station and the main venues. This year is a little different. As festival organiser Chris Fell explained in a welcome speech before the second film, a popular request on the back of last years questionnaires (aside from the extra week) was to show films in a more grandiose setting. 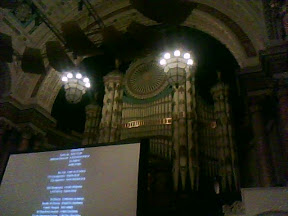 This made sense, (some of the film rooms at the Electric Press and Carriageworks are pretty tiny) and so these first films were shown in the main Victoria Hall of Leeds Town Hall. It's a beautiful building, especially from the inside, with probably a thousand seats in front of a huge and imposing organ, the main flutes of which could hide a stack of people. In between the organ and the seats was suspended a large screen, added specially for the festival, and was served by a powerful projector in the upper circle. It was all very nice, except for one thing that made itself clear as the first film began - it has rubbish acoustics, or at least as far as films were concerned. There was so much echo that it distorted what was said in the more noisy film segments to the point where I lost chunks of dialogue.

Fortunately, only a small proportion of films are being shown there. Hopefully 2010 will drop it as a venue. Shame because other than that it was perfect.

The Men who Stare at Goats (UK/US) (site/wiki)

How journalist Jon Ronson chanced upon the 'Gold Dust' accounts of a, lets say -unconventional- ex US army veteran named Gus Lacey is down to a mix of bravery and good fortune. Gus saw everything from the inside of the US's psychic ops division and relayed enough of it to hook Jon's interest. A select band of soldiers were being trained to walk through walls, mind-trick the enemy, and stop the hearts of animals simply by willing it to happen. Gus himself, while not being able to reach the dizzy heights of a 'Level 4' soldier, was able to show him a video of his hamster dying. Or rather falling over in his cage and then getting up again.

This film is based on the book of the same name, of story-hunting journalist Jon (played by Ewan McGregor) and his journey in 2003 to Baghdad, meeting up with twitchy, paranoid Lyn 'Skip' Casey (George Clooney), one of the ex-soldiers of the First Earth Batallion, an experimental group led by headstrong hippie Bill (Jeff Bridges). The film focuses on just what Skip is doing there, and how the backstories of each of the characters got them to where they are now as they head randomly through the Kuwait desert. Despite the ludicrous claims, Jon becomes involved ever deeper in the stories he hears and cannot help but come along for the ride, taking him deep into dangerous territory with an edgy partner who thinks he can stop a gunman just by staring at him.

It's a really good film, made even better by the simple addition of a line at the beginning; 'More of this is true than you would believe'. You spend a lot of the film with your mouth open thinking, 'they made that bit up, surely..' but chances are it wasn't, as Jon himself explained in the post film Q and A. Much of it actually happened, or refers to actual US military goings on, secret projects, or accounts from ex soldiers. The scripting was tight, with sharp dialogue (and more than one reference to the Project Jedi and McGregors part) and great acting, it's clear the actors were having a good laugh out of it as they were putting it together. It did fall apart at the seams a little as the film made its way to the chaotic conclusion, but this was not enough to spoil it. It goes on general release this weekend. 8/10

Director Jane Campion could not work out why this story of poet John Keats and his love Fanny Brawne had never been made into a film. She went against her better judgement and wrote this biopic anyway. Keats spent the adult part of his 25 short years on the earth as a jobless, money-less aspiring poet in the early 19th century; his publications receiving less than favourable reviews, he scraped by somehow alongside his good-hearted but mischievous friend Charles Armitage Brown.

Fanny is a young woman from a middle-class family, and though the gossipers looked down on her initial interest, and then relations with this jobless layabout, they became very close over the next few years. Fanny's largely indifferent initial tone to his work melting away as she learned how to experience, rather than read the words. At the same time as her mother and maids disapproving, Keats' friend Brown also found the situation harmful to his poetic inspiration and muse, not to mention an end to their larking about like schoolboys.

As a biopic of the short time they had together, Bright Star works very well, although it must be said that the dialogue is the quite thick, stodgy wordplay you would expect from authors like Jane Austin. Depending on your filmgoing habits, this might be a putoff, though I suspect those with an appreciation of Keats' work would get much more from it than I did (again, the acoustics didn't help). If you can penetrate the clever wordplay of duelling poets and their admirers, you should find a deeply romantic tale of two people and the joy and heartache of love. 7.5/10