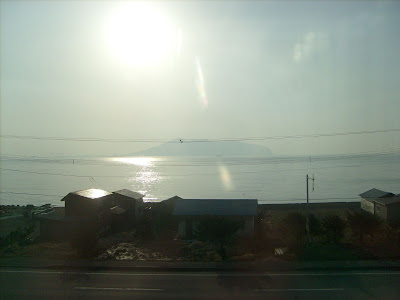 I had a strange feeling of relief when I left Hakodate Station the following morning. Not because I was sick of Hokkaido; far from it in fact. From what I saw of the place on my ill-thought out northern leg it is a beautiful place filled with interesting sights, sounds, tastes and people. A place that far from being limited simply to an isolated wilderness in winter, was in fact full of things to do. This was a place, I had resolved, that I would return to, and study in far more detail.

Tomorrow would be the start of the 2-day stopovers which would form most of the rest of the trip. Today however, it was time to leave the frozen north and return to Honshu it was my final stint of long-distance travel between hotels. 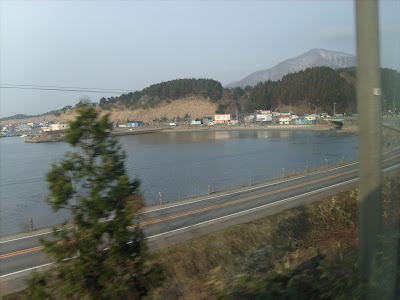 Rounding the cape towards the Tsugaru Strait, the morning view was much nicer than the darkened reflection of myself I had ended up looking at for a few hours a few days earlier. Villages and farms peppered the coastline and the sun shimmered on the waves as we chased cars along the sea fronts and worked back inland to the snowy hills and forests. The occasional good view missed by my camera lens largely due to another passenger who had the tenacity to reserve the window seat next to me. The Seikan Tunnel came quickly and went, and then I was finally back in Honshu. 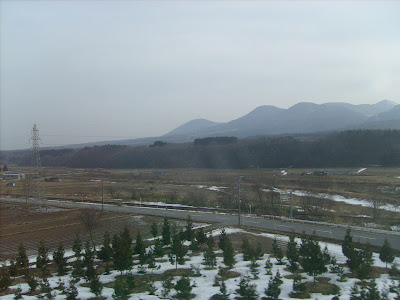 Good old Honshu. A quick tot up revealed that the last 3 days around Hokkaido had involved roughly 1800km of train travel, and perhaps 2-3km of actual sightseeing. I sighed, both pleased at the coverage and lamenting the missed opportunities and experiences.

No matter. Now I was back on the mainland it was easy street from here onward. So long as I followed the west coast on the train as far as Niigata, then tomorrow would be spent sightseeing and nothing else.

Aomori was the getoff point at about 9am. I looked at the seats as the remaining passengers started to flip them back round and got off. At the station I bought the next ticket available to Akita then headed outside to smell the fresh spring air. I set off for downtown Aomori to make use of the intervening hour, stopping only to get an apple from a local grower on his stall - it was the largest apple I had ever seen - it was juicy and delicious, not what you'd expect from an apple the size of a melon. Afterwards I became more aware as I passed the empty orchards just how many they were, particularly in the north here. Aomori is particularly well-known for them.

I found some additional Aomori Pictures here by the way.

To be frank, I had forgotten how to relax. Forever looking at my watch and wilting a little from the sun and the heavy bags, I walked pretty aimlessly down one of the now snow-less main streets, poking my nose into one or two of the shops along the way. After a bit of uninterested wandering, I headed back. I was almost resigned to return to the recognisable comfort of a train station when the towers of an enormous structure poked out over the top of some of the smaller buildings to my right; it was the Aomori Bay Bridge. I'm the sort of person who, if you show me a bridge (or a car, animal, plant, whatever) I'll shrug my shoulders, but if you show me a BIG bridge - well, that's another matter altogether. And this looked pretty damn big. Feeling a tingle of excitement at the prospect of actually doing some sightseeing, I crossed the road and went down a sidestreet, opening out into a bus terminal/car park and beyond that the south side of the Tsugaru Strait where Aomori Port lies. The port itself used to have a major throughput of people, cars and supplies until the Seikan Tunnel opened, turning the 4-hour ferry journey into a half-hour one by train. Heading straight over it was this massive bridge; it looked brand new, like someone had just removed it from its packaging. I wasn't sure what two areas it was connecting but it sure looked purty. 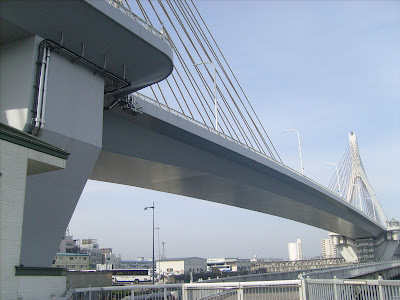 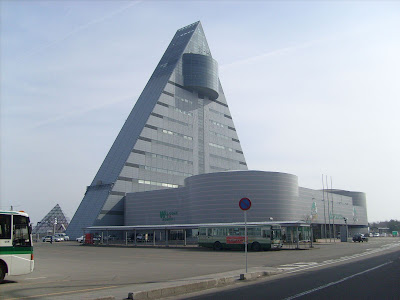 Walking underneath, its underside was completely clean and devoid of the 'street art' that such a structure would be subjected to in the UK, and on the other side, a couple of odd-shaped buildings hugged the coastline. One of them, in the shape of a giant chunk of toblerone, is the Aomori Aspam building. This was the main sightseeing centre for Aomori and its top floor contained a viewing platform looking out to the bay (I later learned.. grr). By now I was right on the coast, and across the port lay a ship in dock. At one point in busier times it was one of the ferry ships, but now, looking a little dilapidated, it had been modified into the Hakkoda-maru Ferry Museum. The front part had been gutted and turned into the museum and the back part (including the viewing deck) had become a beer gardens. During summer it still occasionally gets used for its original purpose of taking passengers onto the sea, but not all the way to Hokkaido - it just does a circle and comes back. 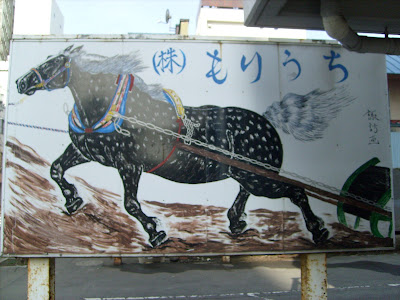 Looking back at the watch, my hour was almost up so I headed back to the station and got on my train. Aomori to Akita was quite nice, especially towards Odate, where the snowy countryside returned and was joined by forests and suspiciously pyramidal hills. 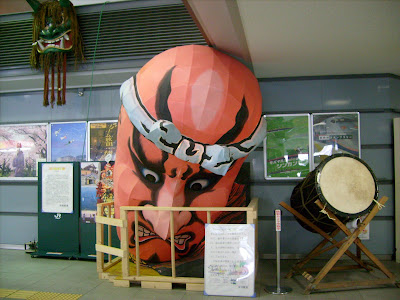 Alighting at Akita, I passed a miniature train that actually carried people along a track, and a drum you could beat if you were feeling annoying, flanked by a rather large mask. At the ticket office, I was told connecting trains to Niigata left in 3 minutes and 3 and a half hours. Not able to convey my need to get the second one to the patient ticket clerk, (I was hungry for a little more sightseeing) I left the counter with a ticket for the former. Leaving and looking a little bothered (I'd missed the former and would need to go back in and try to explain why I needed another one) a guy walked up to me and asked in plain English if there was anything wrong. A little confused at suddenly having to use my native tongue again I explained the situation and me and him waited once more in the queue patiently. Introducing himself as Taki, he explained how he had studied for 4 years in London and when it was our turn once more got them to swap tickets for me. Walking and talking, Taki asked what I needed and without thinking asked for an Internet Cafe, which he duly took me to. Waving goodbye, he said he would return in a while to see me off, then left me to catch up with uploading images and dealing with emails.

An hour went by and by now I had done all I needed, so I waited a half hour but he didn't show, so I paid and left, stopping off at an Italian restaurant to fill up, writing a couple of postcards I'd got from Sapporo a few days before. Now the next task - what did a post office look like again? I headed out of the station and into downtown Akita, which looked a little less modern than some places, filled with smaller, more traditional buildings on narrow back streets, with thousands of yards of electrical wiring connecting them all together. (In Japan no electrics are run underground due to the threat of earthquakes and they don't use gas.) Yet again, the Japanese were on hand to help the confused westerner out. No sooner had I left the station and made the internationally recognised pose of someone who didn't know where they are, too ladies, who were travelling in opposite directions at the time, teamed up and led me through the streets to the nearest post office, quite a detour for both of them. After waving goodbye and bowing (which was becoming second nature by now) I posted my cards by airmail (70 yen each - about 35p (70c) each) and then made it back to the station with about 10 minutes to spare.

It was then I realised I hadn't done my usual calling ahead to let the hotel know I would be late. Back in Tokyo I had been advised to call them whether pre-paying or reserving because if not they would give it to someone else if you hadn't arrived by a certain time. Rushing to a NTT payphone I fished out my phrasebook and the hotel details and made the call. (Japan has 3 phone companies of which NTT seems to be the main one and so the one I had learned to use, and which were fortunately country-wide in abundance). I blathered down what I believed was the right way to say what I wanted and then rushed for my train. 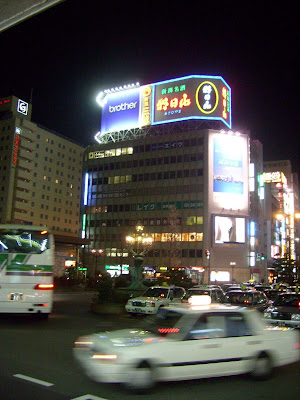 By now, the light was fading, and the views of the coast were getting dimmer. I reached Niigata again at about 8pm, seeing little of the western coast. However, the bustle and neon and tall buildings I had last seen in any number in Sendai had returned, and the relative warmth and contact with living souls sped my through the streets to the hotel which was not more than 5 minutes away. The hotel room was small, but comforting after the commute, and had the by now familiar features - heaters labelled incorrectly as air con, deep baths in a cramped bathroom (complete with electric loo) and wash robes with an elastic belt folded into the familiar pentagon. Shame about the view.